Skip to main content
Back to '2.4: The Periodic Table of the Elements\'

This text describes building the periodic table, one electron at a time.

Wolfgang Pauli's 1935 statement of the exclusion principle was the final critical step for understanding atomic electron configurations, and hence the structure of the periodic table. Pauli won the 1945 Nobel Prize in physics for this achievement, and did other important work in theoretical physics – most notably, predicting the existence of the nutrino.

) is called an orbital. According to the Pauli exclusion principle, no two electrons in the same atom can have the same set of quantum numbers (

). This limits the number of electrons in a given orbital to two (

), and it requires that atom containing more then two electrons must place them in standing wave patterns corresponding to higher principal quantum numbers

, which means that these electrons will be farther from the nucleus and less tightly bound by it.

In this lesson, we will see how the Pauli restrictions on the allowable quantum numbers of electrons in an atom affect the electronic configuration of the different elements, and, by influencing their chemical behavior, governs the structure of the periodic table.

We begin with the simplest: atoms and ions that contain only a single electron.

Hydrogen is of course the only electrically neutral species of this kind, but by removing electrons from heavier elements we can obtain one-electron ions such as

, etc. Each has a ground state configuration of

, meaning that its single electron exhibits a standing wave pattern governed by the quantum numbers

, with the spin quantum number

undefined because there is no other electron to compare it with. All have simple emission spectra whose major features were adequately explained by Bohr's model.

. As the above diagram shows, the quantum numbers

have no effect on the energy; we say that all orbitals having a given value of

are degenerate. Thus the emission spectrum produced by exciting the electron to the

level consists of a single line, not four lines. The wavelength of this emission line for the atoms H,

levels. For the same reason, the energies required to remove an electron from these species increases rapidly as the nuclear charge increases, because the increasing attraction pulls the electron closer to the nucleus, thus producing an even greater attractive force.

All the neutral atoms heavier than hydrogen contain more more than 1 electron. The resulting electrostatic repulsion between these electrons has profound effects on the energies of the various l sublevels – that is, on the energies of

orbitals, relative to the

It takes 1312 kJ of energy to remove the electron from a mole of hydrogen atoms. What might we expect this value to be for helium? Helium contains two electrons, but its nucleus contains two protons; each electron "sees" both protons, so we might expect that the electrons of helium would be bound twice as strongly as the electron of hydrogen. The ionization energy of helium should therefore be twice 1312 kJ/mol, or 2612 kJ/mol. However, if one looks at the spectrum of helium, the continuum is seen to begin at a wavelength corresponding to an ionization energy of 2372 kJ/mol, or about 90% of the predicted value.

Why are the electrons in helium bound less tightly than the +2 nuclear charge would lead us to expect? The answer is that there is another effect to consider: the repulsion between the two electrons; the resulting electron-electron repulsion subtracts from the force holding the electron to the nucleus, reducing the local binding of each.

Electron-electron repulsion is a major factor in both the spectra and chemical behavior of the elements heavier than hydrogen. In particular, it acts to "break the degeneracy" (split the energies) of orbitals having the same value of

The numbers on this diagram show the energies of some orbitals in the atoms of H, He, and Li, relative to the

orbitals of H. The energies of the

increases. The fall in energies of the

orbitals is smaller owing to electron-electron repulsion. The

but are more affected by electron repulsion, so they remain higher than the

Here we show how the energies of the

- and p-orbitals of different principal quantum numbers get split as the result of electron-electron repulsion. Notice the contrast with the similar diagram for one-electron atoms near the top of this page. The fact that electrons preferentially fill the lowest-energy empty orbitals is the basis of the rules for determining the electron configuration of the elements and of the structure of the periodic table.

The German word Aufbau means "building up", and this term has traditionally been used to describe the manner in which electrons are assigned to orbitals as we carry out the imaginary task of constructing the atoms of elements having successively larger atomic numbers. In doing so, we are effectively "building up" the periodic table of the elements, as we shall shortly see.

A memnomic device that some students find useful is to sketch out a grid on which the various orbital types are written. This is overlaid with diagonal arrows as shown here.

How to Play the Aufbau Game

This diagram illustrates the main idea here. Each orbital is represented as a little box that can hold up to two electrons having opposite spins, which we designated by upward- or downward-pointing arrows. Electrons fill the lowest-energy boxes first, so that additional electrons are forced into wave-patterns corresponding to higher (less negative) energies. Thus in the above diagram, the "third" electron of lithium goes into the higher-energy

orbital, giving this element an electron configuration which we write

What is the electron configuration of the atom of phosphorus, atomic number 15?

Solution: The number of electrons filling the lowest-energy orbitals are:

orbital, so the complete electron configuration of P is

The diagram below illustrates the Aufbau rules as they are applied to all the elements. Note especially how the energies of the

orbitals fall between the (

orbitals so, for example the

orbitals begin to fill after the

orbital is filled, but before electrons populate the

orbitals. A similar relation exists with

It is very important that you understand this diagram and how it follows from the Pauli exclusion principle. You should be able to reproduce it from memory up to the

level, because it forms the fundamental basis of the periodic table of the elements.

Inspection of a table of electron configurations of the elements reveals a few apparent non-uniformities in the filling of the orbitals, as is illustrated here for the elements of the so-called first transition series in which the

orbitals are being populated. These anomalies are a consequence of the very small energy differences between some of the orbitals, and of the reduced electron-electron repulsion when electrons remain unpaired (Hund's rule), as is evident in chromium, which contains six unpaired electrons.

The other anomaly here is copper, which "should" have the outer-shell configuration

. The actual configuration of the Cu atom appears to be

orbital is normally slightly below the

orbital energy, the two are so close that interactions between the two when one is empty and the other is not can lead to a reversal. Detailed calculations in which the shapes and densities of the charge distributions are considered predict that the relative energies of many orbitals can reverse in this way. It gets even worse when

Because these relative energies can vary even for the same atom in different chemical environments, most instructors will not expect you to memorize them. 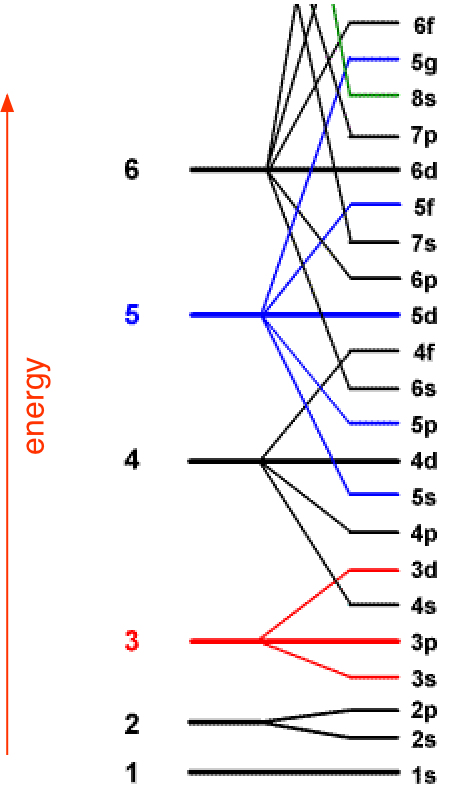 . The actual situation is more complicated than this; calculations show that the energies of

orbitals vary with the atomic number of the element.

The relative orbital energies illustrated above and the Pauli exclusion principle constitute the fundamental basis of the periodic table of the elements which was of course worked out empirically late in the 19th century, long before electrons had been heard of.

The periodic table of the elements is conventionally divided into sections called blocks, each of which designates the type of "sub-orbital" (

) which contains the highest-energy electrons in any particular element.

The table shown above is called the long form of the periodic table; for many purposes, we can use a "short form" table in which the

-block is shown below the

- block "representative elements" and the

-block does not appear at all. Note that the "long form" would be even longer if the

-block elements were shown where they actually belong, between La-Hf and Ac-Db.

This work is licensed under a Creative Commons Attribution 4.0 License.