Print this chapter
Back to '1.5: Applications of Demand and Supply\'

Applications of Demand and Supply

Read this chapter and attempt the "Try It" exercises. This chapter will help you gain familiarity and competencies with regard to basic demand and supply concepts. At a minimum, you should be able to list the factors that shift the demand curve and those that shift the supply curve after completing these chapters. This will help you prepare for similar types of analyses in the units ahead.

4.1 Putting Demand and Supply to Work

The circular flow model suggests that capital, like other factors of production, is supplied by households to firms. Firms, in turn, pay income to those households for the use of their capital. Generally speaking, however, capital is actually owned by firms themselves. General Motors owns its assembly plants, and Wal-Mart owns its stores; these firms therefore own their capital. But firms, in turn, are owned by people - and those people, of course, live in households. It is through their ownership of firms that households own capital.

A firm may be owned by one individual (a sole proprietorship), by several individuals (a partnership), or by shareholders who own stock in the firm (a corporation). Although most firms in the United States are sole proprietorships or partnerships, the bulk of the nation's total output (about 90%) is produced by corporations. Corporations also own most of the capital (machines, plants, buildings, and the like).

The stock market is the set of institutions in which shares of stock are bought and sold. The New York Stock Exchange (NYSE) is one such institution. There are many others all over the world, such as the DAX in Germany and the Bolsa in Mexico. To buy or sell a share of stock, one places an order with a stockbroker who relays the order to one of the traders at the NYSE or at some other exchange.

The process through which shares of stock are bought and sold can seem chaotic. At many exchanges, traders with orders from customers who want to buy stock shout out the prices those customers are willing to pay. Traders with orders from customers who want to sell shout out offers of prices at which their customers are willing to sell. Some exchanges use electronic trading, but the principle is the same: if the price someone is willing to pay matches the price at which someone else is willing to sell, the trade is made. The most recent price at which a stock has traded is reported almost instantaneously throughout the world.

Figure 4.4 "Demand and Supply in the Stock Market" applies the model of demand and supply to the determination of stock prices. Suppose the demand curve for shares in Intel Corporation is given by D1 and the supply by S1. (Even though the total number of shares outstanding is fixed at any point in time, the supply curve is not vertical. Rather, the supply curve is upward sloping because it represents how many shares current owners are prepared to sell at each price, and that number will be greater at higher prices). Suppose that these curves intersect at a price of $25, at which Q1 shares are traded each day. If the price were higher, more shares would be offered for sale than would be demanded, and the price would quickly fall. If the price were lower, more shares would be demanded than would be supplied, and the price would quickly rise. In general, we can expect the prices of shares of stock to move quickly to their equilibrium levels.

Figure 4.4 Demand and Supply in the Stock Market

The equilibrium price of stock shares in Intel Corporation is initially $25, determined by the intersection of demand and supply curves D1 and S1, at which Q1 million shares are traded each day.

The downward slope of the demand curve suggests that at lower prices for the stock, more people calculate that the firm's future earnings will justify the stock's purchase. The upward slope of the supply curve tells us that as the price of the stock rises, more people conclude that the firm's future earnings do not justify holding the stock and therefore offer to sell it. At the equilibrium price, the number of shares supplied by people who think holding the stock no longer makes sense just balances the number of shares demanded by people who think it does.

What factors, then, cause the demand or supply curves for shares of stocks to shift? The most important factor is a change in the expectations of a company's future profits. Suppose Intel announces a new generation of computer chips that will lead to faster computers with larger memories. Current owners of Intel stock would adjust upward their estimates of what the value of a share of Intel stock should be. At the old equilibrium price of $25 fewer owners of Intel stock would be willing to sell. Since this would be true at every possible share price, the supply curve for Intel stock would shift to the left, as shown in Figure 4.5 "A Change in Expectations Affects the Price of Corporate Stock". Just as the expectation that a company will be more profitable shifts the supply curve for its stock to the left, that same change in expectations will cause more people to want to purchase the stock, shifting the demand curve to the right. In Figure 4.5 "A Change in Expectations Affects the Price of Corporate Stock", we see the supply curve shifting to the left, from S1 to S2, while the demand curve shifts to the right, from D1 to D2.

Figure 4.5 A Change in Expectations Affects the Price of Corporate Stock 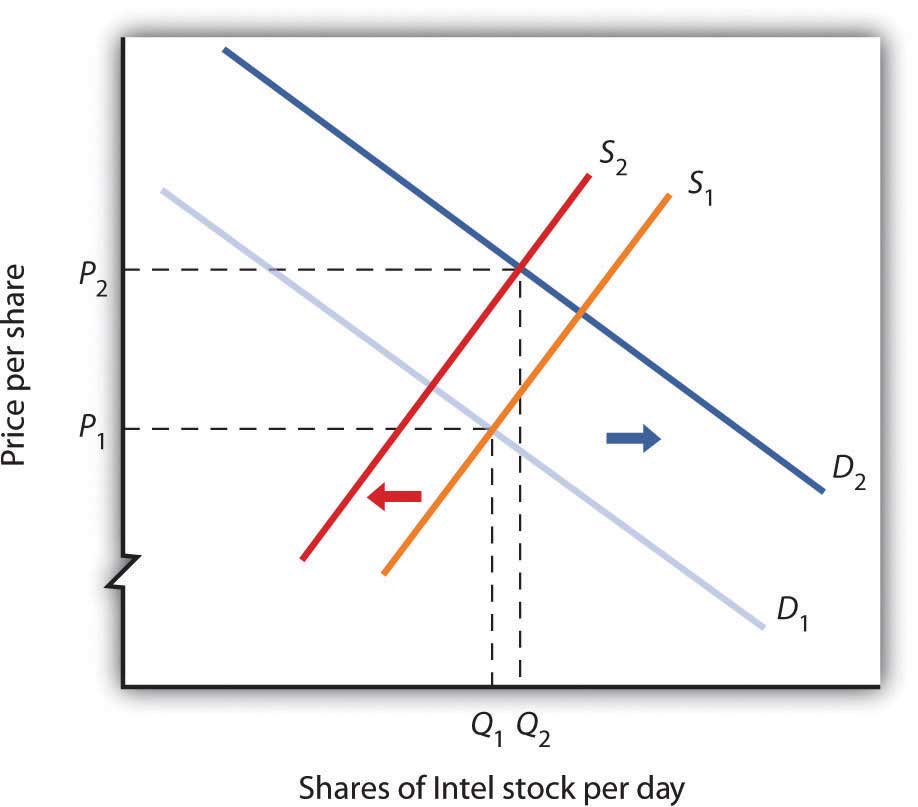 Other factors may alter the price of an individual corporation's share of stock or the level of stock prices in general. For example, demographic change and rising incomes have affected the demand for stocks in recent years. For example, with a large proportion of the U.S. population nearing retirement age and beginning to think about and plan for their lives during retirement, the demand for stocks has risen.

Information on the economy as a whole is also likely to affect stock prices. If the economy overall is doing well and people expect that to continue, they may become more optimistic about how profitable companies will be in general, and thus the prices of stocks will rise. Conversely, expectations of a sluggish economy, as happened in the fall of 2008, could cause stock prices in general to fall.

The stock market is bombarded with new information every minute of every day. Firms announce their profits of the previous quarter. They announce that they plan to move into a new product line or sell their goods in another country. We learn that the price of Company A's good, which is a substitute for one sold by Company B, has risen. We learn that countries sign trade agreements, launch wars, or make peace. All of this information may affect stock prices because any information can affect how buyers and sellers value companies.