Skip to main content
Back to '9.3: Art in Ancient Greece and Rome\'

This video and article discuss the Augustue of Primaporta sculpture, its connection to Greek aesthetics and the Roman political context. What ideas of Roman political culture do you see being manifest in the artwork?

Today, politicians think very carefully about how they will be photographed. Think about all the campaign commercials and print ads we are bombarded with every election season. These images tell us a lot about the candidate, including what they stand for and what agendas they are promoting. Similarly, Roman art was closely intertwined with politics and propaganda. This is especially true with portraits of Augustus, the first emperor of the Roman Empire; Augustus invoked the power of imagery to communicate his ideology. 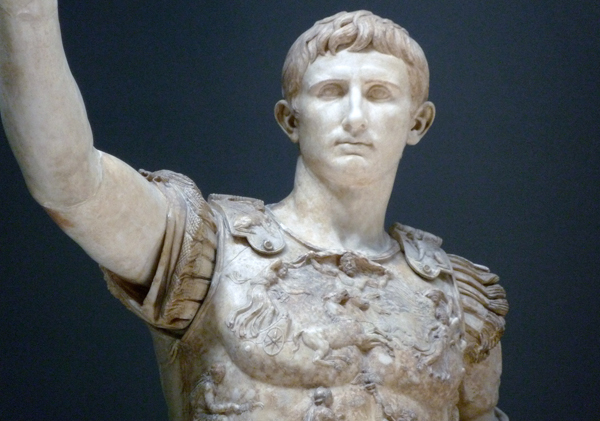 One of Augustus’ most famous portraits is the so-called Augustus of Primaporta of 20 BCE; the sculpture gets its name from the town in Italy where it was found. At first glance this statue might appear to simply resemble a portrait of Augustus as an orator and general, but this sculpture also communicates a good deal about the emperor’s power and ideology. In fact, in this portrait Augustus shows himself as a great military victor and a staunch supporter of Roman religion. The statue also foretells the 200 year period of peace that Augustus initiated, called the Pax Romana.

In this marble freestanding sculpture, Augustus stands in a contrapposto pose with all of his weight on his right leg. The emperor wears military regalia and his right arm is outstretched, demonstrating that the emperor is addressing his troops. We immediately sense the emperor’s power as the leader of the army and a military conqueror. 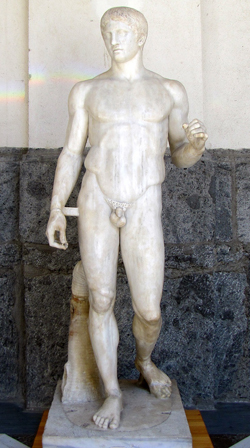 Delving further into the composition of the Primaporta statue, a distinct resemblance to Polykleitos’ Doryphoros, a Classical Greek sculpture of the fifth century BCE, is apparent. Both have a similar contrapposto stance and both are idealized. That is to say that both Augustus and the Spear-Bearer are portrayed as youthful and flawless individuals: they are perfect. The Romans often modeled their art on Greek predecessors. This is significant because Augustus is essentially depicting himself with the perfect body of a Greek athlete: he is youthful and virile, despite the fact that he was middle-aged at the time of the sculpture’s commissioning. Furthermore, by modeling the Primaporta statue on such an iconic Greek sculpture created during the height of Athens’ influence and power, Augustus connects himself to the Golden Age of that previous civilization.

So far the message of the Augustus of Primaporta is clear: he is an excellent orator and military victor with the youthful and perfect body of a Greek athlete. Is that all there is to this sculpture? Definitely not! The sculpture contains even more symbolism. First, at Augustus’ right leg is cupid figure riding a dolphin. The dolphin became a symbol of Augustus’ great naval victory over Mark Antony and Cleopatra at the Battle of Actium in 31 BCE, a conquest that made Augustus the sole ruler of the Empire. The cupid astride the dolphin sends another message too: that Augustus is descended from the gods. Cupid is the son of Venus, the Roman goddess of love. Julius Caesar, the adoptive father of Augustus, claimed to be descended from Venus and therefore Augustus also shared this connection to the gods. 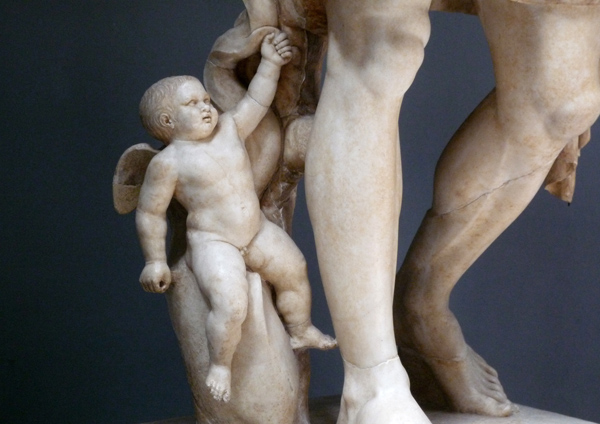 Finally, Augustus is wearing a cuirass, or breastplate, that is covered with figures that communicate additional propagandistic messages. Scholars debate over the identification over each of these figures, but the basic meaning is clear: Augustus has the gods on his side, he is an international military victor, and he is the bringer of the Pax Romana, a peace that encompasses all the lands of the Roman Empire. 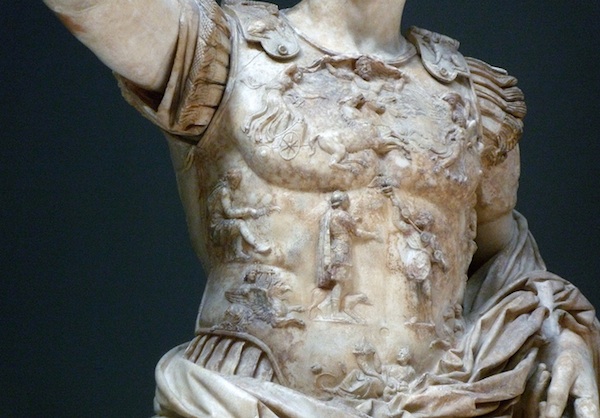 In the central zone of the cuirass are two figures, a Roman and a Parthian. On the left, the enemy Parthian returns military standards. This is a direct reference to an international diplomatic victory of Augustus in 20 BCE, when these standards were finally returned to Rome after a previous battle. Surrounding this central zone are gods and personifications. At the top are Sol and Caelus, the sun and sky gods respectively. On the sides of the breastplate are female personifications of countries conquered by Augustus. These gods and personifications refer to the Pax Romana. The message is that the sun is going to shine on all regions of the Roman Empire, bringing peace and prosperity to all citizens. And of course, Augustus is the one who is responsible for this abundance throughout the Empire. 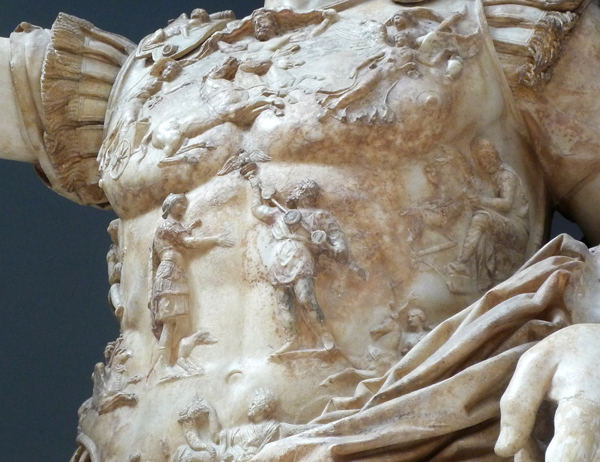 Beneath the female personifications are Apollo and Diana, two major deities in the Roman pantheon; clearly Augustus is favored by these important deities and their appearance here demonstrates that the emperor supports traditional Roman religion. At the very bottom of the cuirass is Tellus, the earth goddess, who cradles two babies and holds a cornucopia. Tellus is an additional allusion to the Pax Romana as she is a symbol of fertility with her healthy babies and overflowing horn of plenty.

The Augustus of Primaporta is one of the ways that the ancients used art for propagandistic purposes. Overall, this statue is not simply a portrait of the emperor, it expresses Augustus’ connection to the past, his role as a military victor, his connection to the gods, and his role as the bringer of the Roman Peace.