Read this tutorial, which outlines some important terminological distinctions for dealing with causation. Causation is an ideal topic to address in a course on critical thinking, because it is something we feel we understand well in our everyday lives. Once we begin trying to think scientifically about causes, however, we find that fixing the causes of some event requires precision and subtlety.

But we also speak of general causation as a relation between two types of events, as in :

These concepts about causal connections are also quite useful:

For example, suppose there was an explosion in a room full of flammable gases. The triggering cause might be the event of someone lighting a match in the room, and the presence of the gases would be the standing cause. Similarly, the standing cause of a particular riot might have to do with high unemployment, with the triggering cause being some particular event such as perhaps someone being beaten up by the police.

The universe contains objects and processes at various levels. Bigger objects such as galaxies are made up of stars and planets, and societies are composed of smaller things such as individual human beings. Similarly, high level processes such as the conduction of electricity is composed of lower-level processes such as the movement of electrons. To explain causation, it is not enough just to know that A is the cause of B, we need a theory that explains how A causes B. What is needed is a theory of the lower-level causal mechanisms that lead from A to B.

For example, to explain why heating causes a piece of metal to expand, we cite the fact that heating gives energy to the metal atoms, and as a result of increasing vibration due to higher energy the distance between the atoms increase and this constitutes expansion. The structure of this explanation can be represented by a diagram: 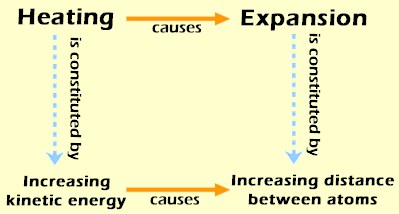 What this diagram shows is that a high level physical causal process is explained in terms of lower-level mechanisms. Without lower-level mechanisms, we would not be able to understand how high-level causation can occur. This applies not just to physics but to other disciplines as well. For example, in macroeconomics, high-level properties like GDP, inflation and unemployment rate are also to be explained at a lower level by the actions of individuals in the economy.