Skip to main content
Back to '5.2: Sample Spaces, Events, and Their Probabilities\'

Sample Spaces, Events, and Their Probabilities

3.1 Sample Spaces, Events, and Their Probabilities

Rolling an ordinary six-sided die is a familiar example of a random experiment, an action for which all possible outcomes can be listed, but for which the actual outcome on any given trial of the experiment cannot be predicted with certainty. In such a situation we wish to assign to each outcome, such as rolling a two, a number, called the probability of the outcome, that indicates how likely it is that the outcome will occur. Similarly, we would like to assign a probability to any event, or collection of outcomes, such as rolling an even number, which indicates how likely it is that the event will occur if the experiment is performed. This section provides a framework for discussing probability problems, using the terms just mentioned.

An event E is said to occur on a particular trial of the experiment if the outcome observed is an element of the set E.

Construct a sample space for the experiment that consists of tossing a single coin.

The outcomes could be labeled h for heads and t for tails. Then the sample space is the set S = {h, t}.

Construct a sample space for the experiment that consists of rolling a single die. Find the events that correspond to the phrases "an even number is rolled" and "a number greater than two is rolled".

Similarly the event that corresponds to the phrase "a number greater than two is rolled" is the set T = {3, 4, 5, 6}, which we have denoted T.

A graphical representation of a sample space and events is a Venn diagram, as shown in Figure 3.1 "Venn Diagrams for Two Sample Spaces" for Note 3.6 "Example 1" and Note 3.7 "Example 2". In general the sample space S is represented by a rectangle, outcomes by points within the rectangle, and events by ovals that enclose the outcomes that compose them.

A device that can be helpful in identifying all possible outcomes of a random experiment, particularly one that can be viewed as proceeding in stages, is what is called a tree diagram. It is described in the following example.

Construct a sample space that describes all three-child families according to the genders of the children with respect to birth order.

Two of the outcomes are "two boys then a girl", which we might denote bbg, and "a girl then two boys", which we would denote gbb. Clearly there are many outcomes, and when we try to list all of them it could be difficult to be sure that we have found them all unless we proceed systematically. The tree diagram shown in Figure 3.2 "Tree Diagram For Three-Child Families", gives a systematic approach. 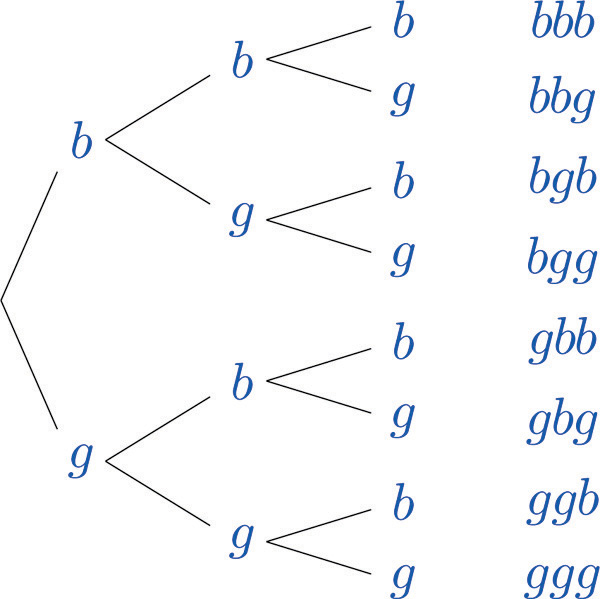 The line segments are called branches of the tree. The right ending point of each branch is called a node. The nodes on the extreme right are the final nodes; to each one there corresponds an outcome, as shown in the figure.

From the tree it is easy to read off the eight outcomes of the experiment, so the sample space is, reading from the top to the bottom of the final nodes in the tree,

The probability of an event A is the sum of the probabilities of the individual outcomes of which it is composed. It is denoted P(A).

The following formula expresses the content of the definition of the probability of an event:

Since the whole sample space S is an event that is certain to occur, the sum of the probabilities of all the outcomes must be the number 1.

In ordinary language probabilities are frequently expressed as percentages. For example, we would say that there is a 70% chance of rain tomorrow, meaning that the probability of rain is 0.70. We will use this practice here, but in all the computational formulas that follow we will use the form 0.70 and not 70%.

A coin is called "balanced" or "fair" if each side is equally likely to land up. Assign a probability to each outcome in the sample space for the experiment that consists of tossing a single fair coin.

With the outcomes labeled h for heads and t for tails, the sample space is the set S = {h, t}. Since the outcomes have the same probabilities, which must add up to 1, each outcome is assigned probability 1/2.

A die is called "balanced" or "fair" if each side is equally likely to land on top. Assign a probability to each outcome in the sample space for the experiment that consists of tossing a single fair die. Find the probabilities of the events E: "an even number is rolled" and T: "a number greater than two is rolled".

With outcomes labeled according to the number of dots on the top face of the die, the sample space is the set S = {1, 2, 3, 4, 5, 6}. Since there are six equally likely outcomes, which must add up to 1, each is assigned probability 1/6.

Two fair coins are tossed. Find the probability that the coins match, i.e., either both land heads or both land tails.

Similarly, from experience appropriate choices for the outcomes in S are:

which give the same final answer

The previous three examples illustrate how probabilities can be computed simply by counting when the sample space consists of a finite number of equally likely outcomes. In some situations the individual outcomes of any sample space that represents the experiment are unavoidably unequally likely, in which case probabilities cannot be computed merely by counting, but the computational formula given in the definition of the probability of an event must be used.

The breakdown of the student body in a local high school according to race and ethnicity is 51% white, 27% black, 11% Hispanic, 6% Asian, and 5% for all others. A student is randomly selected from this high school. (To select "randomly" means that every student has the same chance of being selected.) Find the probabilities of the following events:

The experiment is the action of randomly selecting a student from the student population of the high school. An obvious sample space is S = {w, b, h, a, o}. Since 51% of the students are white and all students have the same chance of being selected, P(w) = 0.51, and similarly for the other outcomes. This information is summarized in the following table:

The student body in the high school considered in Note 3.18 "Example 8" may be broken down into ten categories as follows: 25% white male, 26% white female, 12% black male, 15% black female, 6% Hispanic male, 5% Hispanic female, 3% Asian male, 3% Asian female, 1% male of other minorities combined, and 4% female of other minorities combined. A student is randomly selected from this high school. Find the probabilities of the following events:

Now the sample space is S = {wm, bm, hm, am, om, wf, bf, hf, af, of}. The information given in the example can be summarized in the following table, called a two-way contingency table:

This work is licensed under a Creative Commons Attribution-NonCommercial-ShareAlike 3.0 License.