Cuneiform and the Invention of Writing

This article discusses the significance of the Ancient Near East in the development of the written word and the emergence of figural representation. Think about how the technologies of writing changed society and culture

The Invention of Writing

It is almost impossible to imagine a time before writing. Our thanks should go to the cultures of the Ancient Near East. However, you might be disappointed to learn that writing was not invented to record stories, poetry, or prayers to a god. The first fully developed written script, cuneiform, was invented to account for something unglamorous, but very important—surplus commodities: bushels of barley, head of cattle, and jars of oil!

The origin of written language (c. 3200 B.C.E.) was born out of economic necessity and was a tool of the theocratic (priestly) ruling elite who needed to keep track of the agricultural wealth of the city-states. The last known document written in the cuneiform script dates to the first century B.C.E. Only the hieroglyphic script of the Ancient Egyptians lasted longer. 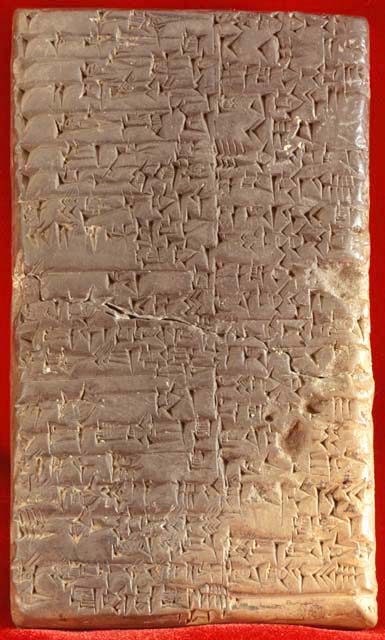 Cuneiform script tablet from the Kirkor Minassian collection in the Library of Congress. From Year 6 in the reign from Amar-Suena/Amar-Sin or 2041 and 2040 B.C.E.

A Reed and Clay Tablet

A single reed, cleanly cut from the banks of the Euphrates or Tigris river, when pressed cut-edge down into a soft clay tablet, will make a wedge shape. The arrangement of multiple wedge shapes (as few as two and as many as ten) created cuneiform characters. Characters could be written either horizontally or vertically, although a horizontal arrangement was more widely used.

Probably because of this extraordinary flexibility, the range of languages that were written with cuneiform across history of the Ancient Near East is vast and includes Sumerian, Akkadian, Amorite, Hurrian, Urartian, Hittite, Luwian, Palaic, Hatian and Elamite.

Cuneiform writing was typically done on clay tablets, and these ranged in size from little more to an inch to several inches long. Letters written on clay tablets would be placed in clay envelopes and "addressed" in cuneiform.

Cuneiform was also carved into important stone stele such as the Law Code Stele of Hammurabi (a stele is a vertical stone monument or marker), and dedications were inscribed in cuneiform on clay cones that were laid at the foundation of palaces and temples identifying to whom the structure was dedicated and who built it.

Cylinder Seal (with modern impression), royal worshipper before a god on a throne with bull's legs; human-headed bulls below, c. 1820-1730 B.C.E. (Metropolitan Museum of Art)

Cuneiform was used for official accounting, governmental and theological pronouncements and a wide range of correspondence. Nearly all of these documents required a formal "signature," the impression of a cylinder seal.

A cylinder seal is a small pierced object, like a long round bead, carved in reverse (intaglio) and hung on strings of fiber or leather. These often beautiful objects were ubiquitous in the Ancient Near East and remain a unique record of individuals from this era. Each seal was owned by one person and was used and held by them in particularly intimate ways, such as strung on a necklace or bracelet.

When a signature was required, the seal was taken out and rolled on the pliable clay document, leaving behind the positive impression of the reverse images carved into it. However, some seals were valued not for the impression they made, but instead, for the magic they were thought to possess or for their beauty.

The first use of cylinder seals in the Ancient Near East dates to earlier than the invention of cuneiform, to the Late Neolithic period (7600–6000 B.C.E.) in Syria. However, what is most remarkable about cylinder seals is their scale and the beauty of the semi-precious stones from which they were carved. The images and inscriptions on these stones can be measured in millimeters and feature incredible detail.

The stones from which the cylinder seals were carved include agate, chalcedony, lapis lazuli, steatite, limestone, marble, quartz, serpentine, hematite and jasper; for the most distinguished there were seals of gold and silver. To study Ancient Near Eastern cylinder seals is to enter a uniquely beautiful, personal and detailed miniature universe of the remote past, but one which was directly connected to a vast array of individual actions, both mundane and momentous. 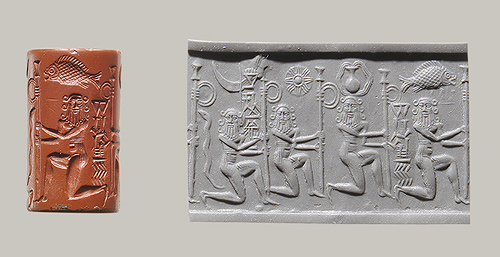 Why Cylinder Seals are Interesting

Art historians are particularly interested in cylinder seals for at least two reasons. First, it is believed that the images carved on seals accurately reflect the pervading artistic styles of the day and the particular region of their use. In other words, each seal is a small time capsule of what sorts of motifs and styles were popular during the lifetime of the owner. These seals, which survive in great numbers, offer important information to understand the developing artistic styles of the Ancient Near East.

The second reason why art historians are interested in cylinder seals is because of the iconography (the study of the content of a work of art). Each character, gesture and decorative element can be "read" and reflected back on the owner of the seal, revealing his or her social rank and even sometimes the name of the owner. Although the same iconography found on seals can be found on carved stelae, terra cotta plaques, wall reliefs and paintings, its most complete compendium exists on the thousands of seals which have survived from antiquity.