Skip to main content
Back to '9.2: Art of the Ancient Near East and Egypt\'
Log in or Sign up to track your course progress, gain access to final exams, and get a free certificate of completion!

Hammurabi: The king who made the four quarters of the earth obedient

The second millennium's beginning is characterized by the rise of two warring city states, Isin and Larsa, a competition which Isin loses, conquered by Rim-Sin 1822-1763 B.C.E. 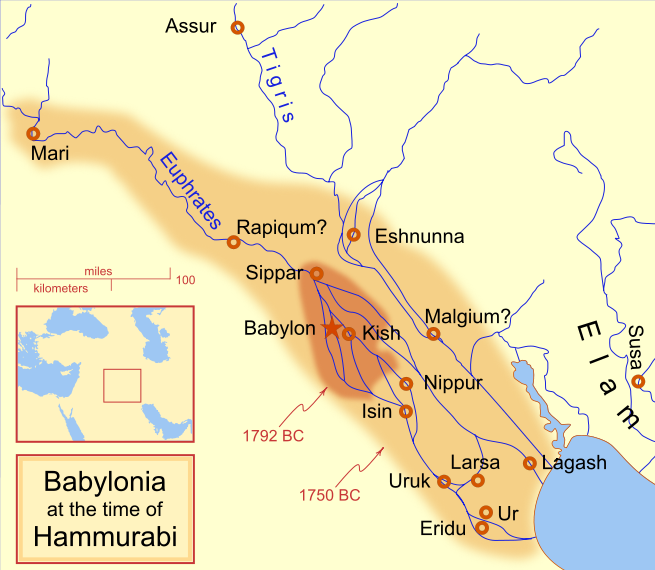 Babylonia at the Time of Hammurabi

After thirty years of attempted consolidation, Rim-Sin was ousted by Hammurabi (1792-1750 B.C.E.) of the city state of Babylon.

Over the next few years, Hammurabi conquered much of northern and western Mesopotamia and by 1776 B.C.E., he is the most far-reaching leader of Mesopotamian history, describing himself as "the king who made the four quarters of the earth obedient." Documents show Hammurabi was a classic micro-manager, concerned with all aspects of his rule, and this is seen in his famous legal code, which survives in partial copies on this stele in the Louvre and on clay tablets (a stele is a vertical stone monument or marker often inscribed with text or with relief carving). We can also view this as a monument presenting Hammurabi as an exemplary king of justice.

What is interesting about the representation of Hammurabi on the legal code stele is that he is seen as receiving the laws from the god Shamash, who is seated, complete with thunderbolts coming from his shoulders. The emphasis here is Hammurabi's role as pious theocrat, and that the laws themselves come from the god.

The Stele of Hammurabi